One of the biggest surprises at the 2013 Detroit Auto Show this year ended up being the Ford Atlas concept truck. There was still some doubt even before the show if Ford would roll out the 2015 concept or just sit tight with their new line of Ford Transit vans however the lure of stealing the spotlight from GM and their Silverado and Sierra trucks was too much.

Possibly the hottest hunk of steel at the show outside of the new Chevy Corvette is the big Blue's big brute of a truck the Atlas concept truck. Where GM went for soft tweaks to its flagship pickups the new Ford concept finishes with a flourish. 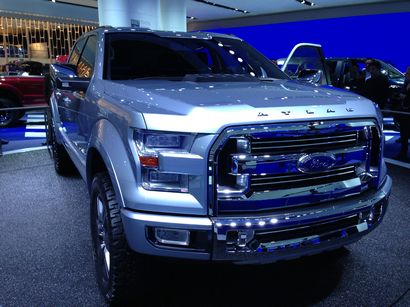 Big bold shapes and lots of chrome bring the macho feel even if the new eco-boost engine and fuel efficient features like active shutter technology and adjustable ride height promise to make the future Ford truck one of the best trucks on the road for MPG.

The concept rules out at a critical time in the new truck market, right after Ram was named truck of the year at the 2013 Detroit Auto show and right before GM rolls out its two new flagship pickups. The hope is the new concept will keep truck buyers in suspense for the next big thing until 2015 rolls around. You can also check out Steve's thoughts on the Atlas concept truck preview on the blog.

Less noticed but something much closer to showing up in local Ford dealers showrooms are the new line of mid-sized and full-sized vans. Originally released in Europe, the Transit and Transit Connect vans are now crossing the pond to do service.

Available in a both mini a glass minivan style and panel van variant for commercial purposes, the new Transit vans are expected to deliver best in class fuel economy at a 25% increase to the currently available Ford E-Series. To read more about available packages and trims on the Transit, check out Steve's coverage of Ford at the 2013 North American International Auto Show on his blog.