Until the recent big Suzuki football commercial involving an Eskimo turning in his sled for a new 2012 Suzuki Kizashi, you might not have been faulted for ignorance on what Suzuki made besides motorcycles. The recent addition of the Kizashi to car search engine sites like LotPro.com has changed that and brought about attention to this more budget minded brand.

If you're into bikes, you likely already know who Suzuki is. If not, they are a manufacturer of motorcycles, cars, and other gas powered vehicles that are looking to duplicate the success of their Japanese rival, Honda in the United States. Their lineup of new cars for sale include new cars under 15 000, with the starting price of all their new cars under 20 000.

Suzuki at the 2012 Chicago Auto Show 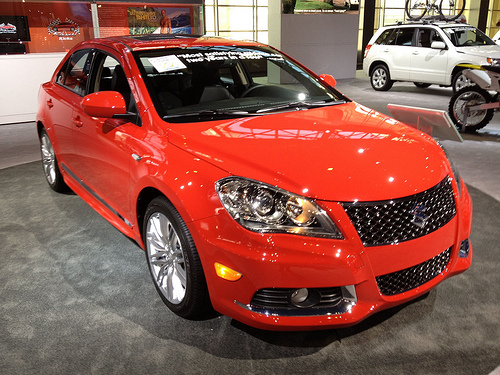 Front and center this year was the Kizashi, which carries a base starting price of $18,999 This puts it just over new cars under 15 000 like the Suzuki SX4, but under many of its competitors prices while still maintaining that new cars under 20 000 price point. The look is sporty, and while it has a compact appearance compared to others in its class, it makes the most of its available interior room which you can check out by heading to the Suzuki gallery by clicking on one of the images below from the 2012 Chicago Auto Show. 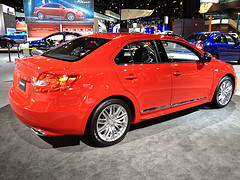 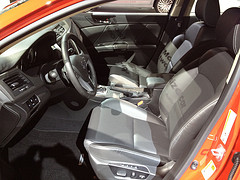 Compared to other new cars for sale today, it has a pretty agreeable price, good handling, a great selection of extra options both standard and optional, really sharp looks, and a name that just sounds fun. The only part it falls a little short on is horse power. Straight line power is not its thing but if you weave it in and out of parking spots at the Suzki dealer in Houston Texas you might love it more.

Pricing varies however between lower and higher end models. The Suzuki Kizashi leather edition starts at $23,899 while the Suzuki Kizashi AWD system will set you back $22,349 at a nearby Suzuki dealer Houston Texas area. Getting both will cost you $25,249. The all wheel drive is likely the biggest seller, as AWD tends to be something many automakers shy away from. If you need that extra grip but don't need the size or cost of an all out 4x4, the Kizashi might be just the thing to check out.