Those rumors of a Japanese automaker implementing a diesel? Put them to rest, as Mazda announced at the 2012 Los Angeles Auto Show that the all new 2014 Mazda6 sedan will have a SkyActiv-D 2.2L clean diesel engine debuting in the U.S. in the second half of 2013.

The SkyActiv-D 2.2L clean diesel four-cylinder engine is expected to generate 155 horsepower and a "high amount of torque as well as cleaner combustion, the SKYACTIV-D 2.2L is 10 percent lighter than the current MZR 2.2-liter diesel engine sold in other global markets", said Jim O'Sullivan, President and CEO of Mazda North American Operations (MNAO).

The all new 2014 Mazda6 with turbo diesel engine will be the first Japanese car to make a debut in America since the late 1980s. Use our Mazda dealer locater to find the diesel powered sedan coming next summer. 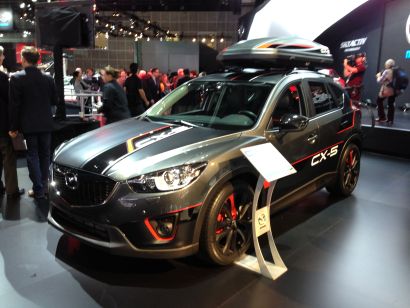 Mazda also debuted a pretty sweet looking CX-5, the special edition Mazda CX-5 Dempsey. Yup, the vehicle was made specifically for actor and racecar driver, Patrick Dempsey himself. The special edition also has the SkyActiv-D 2.2L clean diesel engine we previously mentioned would be available in the Mazda6.

The crossover is complete with a motorsport and cycling theme with matte black, grey, and red paint on the exterior as well as the interior. Although this particular vehicle is only available to Mr. Dempsey, the 2014 Mazda CX-5 will be available in showrooms around the U.S. in early 2013. You can also find pricing on used models by visiting our >Mazda used cars section.

With the new engine generating 19% more horsepower and 23% more torque the CX-5 still has an MPG rating of 35 highway keeping the number one spot in the SUV segment.

The starting prices have not been announced for the 2014 Mazda6 and CX-5 models, but if you are looking to purchase keep watch over our new cars for sale section. We'll post numbers when we get them.