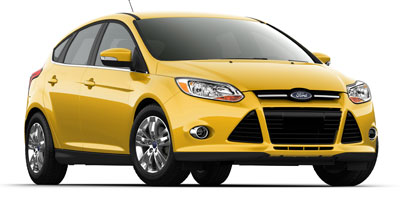 The current redesigned 2012 Ford Focus was already pushing boundaries. In an age where cars over 30 mpg has become common among the next generation vehicles the standard Focus is already pushing the line for 40 mpg cars. But Ford seems to have their eyes set on a farther goal, 100 mpg cars, and with the new 2012 Ford Focus Electric they may have already made good on their goals.

Breaking the century mark for fuel economy displaces the current economy leader, the Nissan Leaf which averages a gasoline equivalent of 99 miles to the gallon as well as tops rival Big Three automaker General Motors who's Chevy Volt averages an electric equivalent of 94 mpg. That's over three times as efficient as the cheap cars over 30 MPG, but all that efficiency comes at a steep price as well.

First there is the matter of price. Standard Focus models start at $16,500 and with say the modest $1,500 in incentives you can get now on them, the price drops to new cars under 15000 price range. Meanwhile the electric Focus will start at $39,995 and be eligible for $7500 in government tax credits for electric vehicles. Your state may also have additional state tax credits to apply towards as well. But even with all these big tax credits, the electric is nearly twice as expensive at just over $32,000 then two of the new cars under 15000 price.

Coming Soon to Ford Dealer Locations Near You

Physically the electric Focus doesn't much differ then the gasoline cousin you see on Ford dealer locations already but mechanically they are nearly worlds apart. While the standard Focus has helped combustion engine cars push the boundaries past 40 mpg cars, the Focus electric makes it sound trivial with nearly twice the fuel economy. But it also comes with one large caveat. And that is while you can get an effective 110 mpg in the city, the new electric car only has a range of 73 miles.

This limitation takes some consideration, especially for those buyers eager to get one of the first available at local Ford dealer locations. Depending on how far you have to go to get in line, you might not make it home without stopping. Meanwhile cheap cars like the gasoline powered Focus with their 12 gallon tank means even if you get stuck in city driving the whole way, you can get 336 miles or more before the need to pull over. So considering your driving habits is important before you run out and make the big switch.