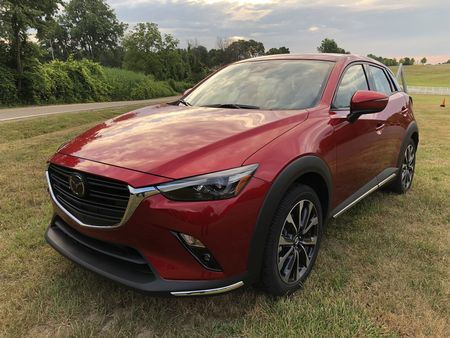 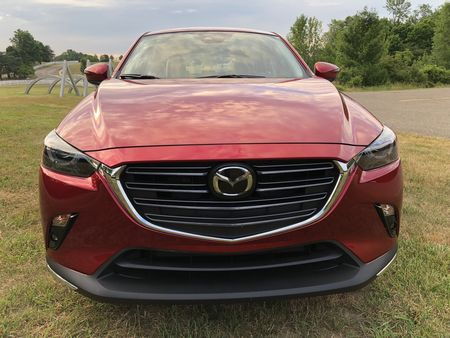 Now in its fourth model year and sharing a platform with the subcompact Mazda2 (sold in the US as the Toyota Yaris iA sedan), changes to the 2019 Mazda CX-3 include a bit more horsepower, slightly better EPA-estimated MPG numbers, a new front grille, a standard rear view camera across the lineup, an electronic parking brake, a redesigned center console with a real armrest and covered storage, larger seat cushions made with vibration-absorbing urethane foam, and a rear center armrest with built-in cupholders. The Touring trim receives standard automatic headlights, rain-sensing wipers, and automatic climate control, while the Grand Touring model adds a full-color, head-up Active Driving Display and full leather seats. 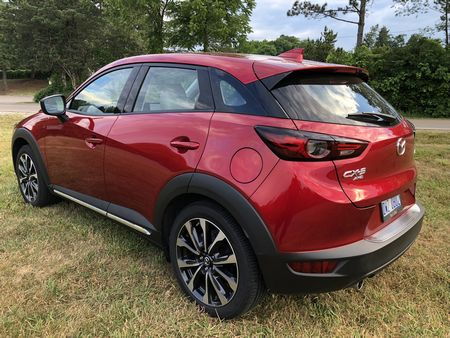 While it's shorter, lower, and not as visually arresting as either the CX-5 or CX-9, the CX-3's design, which is neither overly complicated nor fussy, won't be mistaken for anything other than a member of Mazda's "Kodo Soul in Motion" crossover family.

Up front, the CX-3 features a smaller version of the brand's five-point grill that, on all but the upper portion, is outlined by a chrome trim strip that traces the lower two-thirds of the new four bar style and rises until it meets and bisects the headlamp enclosures. Below the headlights, the narrow, vertical fog lamps bracket an aggressive lower air intake. The rear window mimics the grille's five-pointed theme and, on our tester sits atop a pair of redesigned LED taillamps. 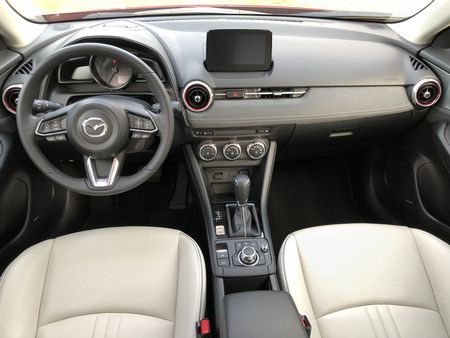 The sharply creased exterior is wrapped around an interior that, although not nearly as sybaritic as the CX-5 and CX-9, still offers a class-above mix of materials and soft-touch surfaces. Front seat occupants are treated to more comfortable seats – even in the base Sport model – courtesy of larger seat cushions (covered in leather on Grand Touring models where last year they were trimmed in harder-to-maintain Lux Suede). The view out the front and sides is very good, although the A-pillars aren’t all that narrow. The view out the rear three-quarters is helped by a small window between the C- and D-pillars, although the D-pillar, itself, is fairly wide. Mazda also added more sound-deadening material this year that's evident in around-town driving where the interior is noticeably quieter than last year. 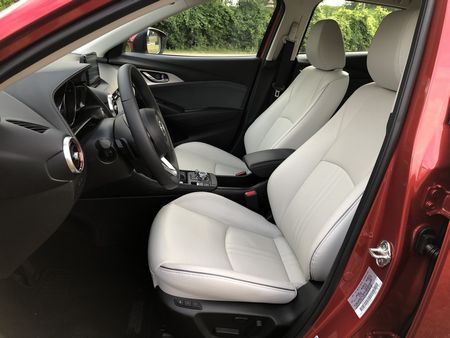 The dash features soft-touch surfaces, while the lower pad has been revised – substituting the contrasting white trim between the instrument cluster and passenger door with an easier-to-clean matching gray color. The pad itself is larger, eliminating the trim strip between the center and outboard vents. The various gauges and knobs are clear and easy to read as well as intuitive.

The center stack consists of a seven-inch touchscreen that can be operated from the console by Mazda's command remote interface – a six button, two knob setup that controls everything from the various radio options to the navigation system (standard on the Grand Touring). In addition to the seat cushions, Mazda took care of another gripe we had - center arm rest. On previous models, it extended too far forward, partially blocked the infotainment controls, and didn't offer a storage console. Mazda addressed the issue by reducing the length of the arm rest that now serves as a cover for a storage bin. 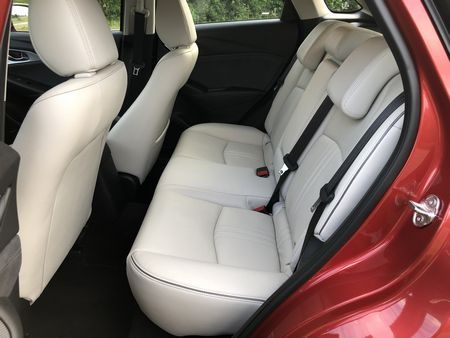 But things are hardly perfect as the view out the back is hampered by the rear headrests when in use, and the small rear window, while the cargo area measures a mere 12.4 cu ft. In addition, the tight rear seat, rising beltline, and curved roofline conspire to make things dismal for tall passengers in back, while the infotainment system is not only over-complicated, it lacks the simplicity found in earlier (2013-2016) CX-5s, as well as Apple CarPlay and Android Auto capability. 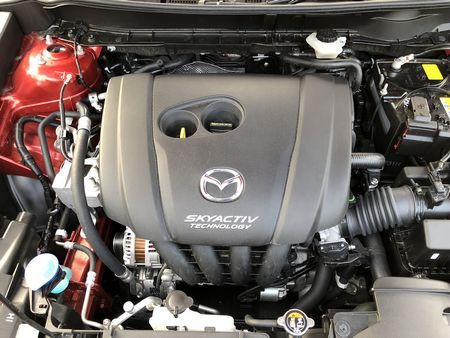 The only engine offered on the CX-3 is Mazda's normally-aspirated Skyactiv-G 2.0-liter inline-4 that develops 148 horsepower (up 2 from last year) at 6,000 rpm and 146 lb.-ft. of torque (unchanged) at just 2,000 rpm. It's mated to a conventional 6-speed automatic transmission – a refreshing change in a class that increasingly has moved to soul-sucking CVTs.

Fuel economy is one of the CX-3's strong suits and not something you’d expect in a crossover that’s this much fun to toss about. For 2019, front-wheel-drive CX-3s earn an EPA-estimated 29 miles per gallon in the city, 34 on the highway, and 31 combined (an increase of 1 mpg in the combined category), while all-wheel-drive versions like our tester are rated at 27 city, 32 highway, and 29 combined (no change from last year). Our own vehicle-measured observed fuel economy was an outstanding 29.3 miles per gallon in spirited city driving. 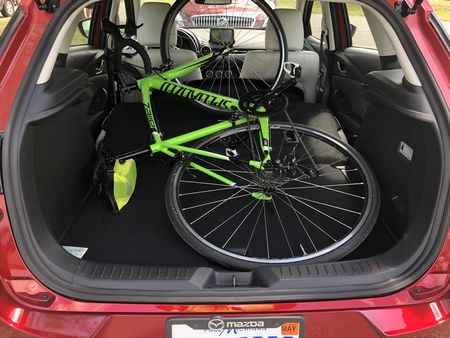 The 2.0-liter normally-aspirated four-cylinder engine is well-balanced and pairs nicely with the six-speed automatic. Power is sufficient, but hardly impressive, with the engine/transmission combination making its best case at highway speeds and on the Grand Touring model that's equipped with paddle shifters.

Like its bigger siblings, the CX-3 has established itself as the best-handling vehicle in its class. Chalk this up to the fact that, unlike most subcompact crossovers, it's actually fun to drive. Steering and handling are exemplary, with plenty of feedback through the steering wheel and offering improved response thanks to the addition of Mazda's G-Vectoring Control system that, during cornering, dabs the brakes a bit to shift weight forward to facilitate a tighter line. The brakes are equally good - easy to modulate, with a nice initial bite to the pads and offering excellent feedback through the pedal.

At the same time, the engine struggles at lower speeds in around town driving where the lack of power is most apparent. We should also point out that, like most Mazdas, the ride, tuned for handling, is also stiffer than rivals and can feel bumpy over potholes and larger road imperfections and might be too firm for some drivers, while the paddle shifters – which help wring out the most from the busy engine - are not offered on either the Sport or Touring trims. 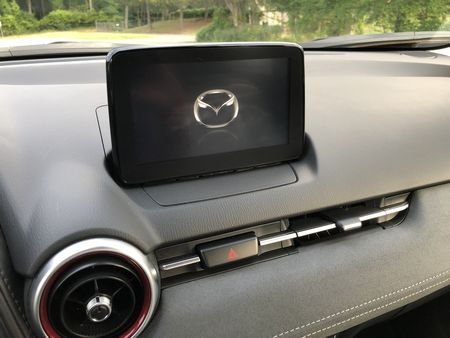 2019 Mazda CX-3 pricing starts at $21,365 (including a $975 destination fee) for a front-wheel-drive Sport model, and can top out at over $29,000 for an all-wheel-drive Grand Touring model finished in optional Soul Red Mica and equipped with the Premium Package.

With all that, the MSRP, including the destination charge, came to $29,625 – a price, it should be noted, that overlaps the larger and quieter CX-5 Touring model. 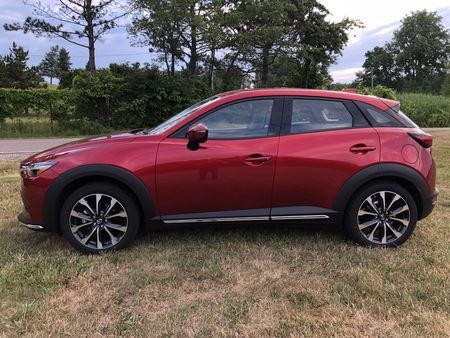 The 2019 Mazda CX-3 isn't for everyone. The ride is firm, back seat accommodations are tight, cargo room behind the back row is limited, the infotainment system is overly complicated and distracting, and the pricing on top models overlaps that of the more refined CX-5.

But these shortcomings are more than offset by a fluid design, class-above interior, spirited handling, and excellent fuel economy, making it a top pick in the small crossover class. 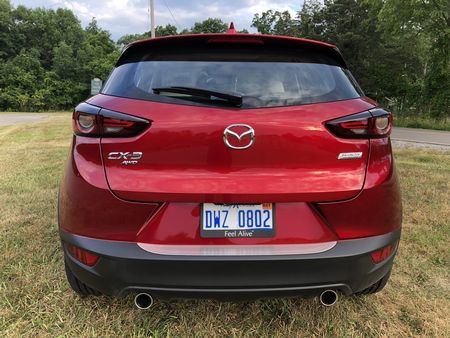