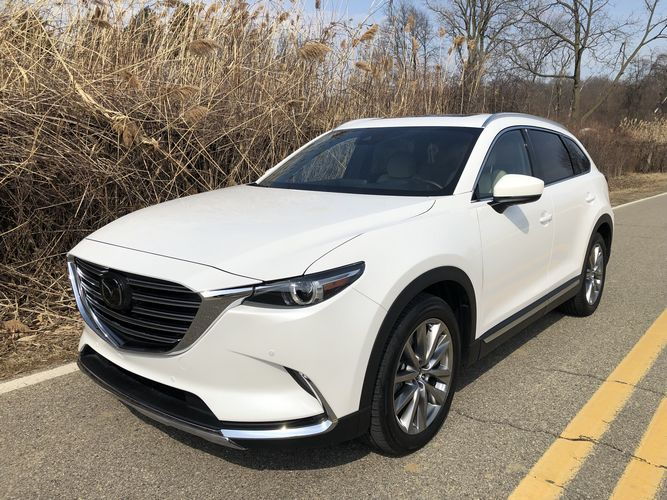 Now into its fourth year, the 2019 version of the second-gen CX-9 receives only minor updates, the most notable of which is the addition of Apple CarPlay and Android Auto capability on all but the base Sport trim, alleviating many of the issues we have with Mazda's infotainment system – at least on Touring, Grand Touring, and Signature models.

Other changes of merit include the addition of auto folding door mirrors, a 360-degree view monitor, and ventilated front seats, along with a gratis 3-year subscription to SiriusXM Traffic & Travel Link on Grand Touring and Signature models - a perk that also has been added to the optional Touring Premium Package. 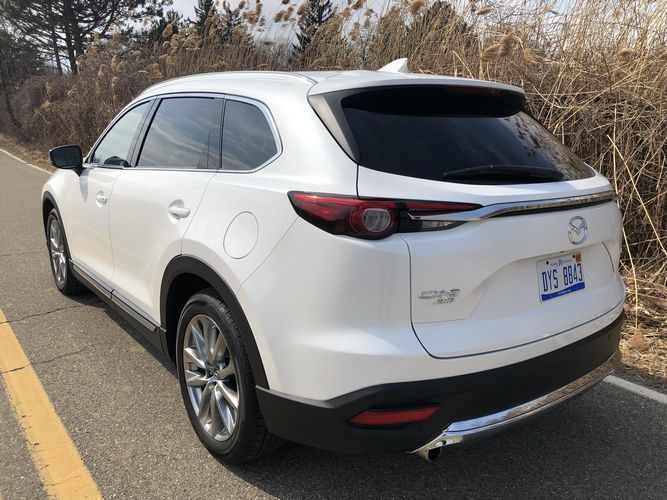 Refuting the stereotypical image of the midsize crossover that sacrifices style for versatility and practicality, the Kodo design-influenced CX-9 is fashionable and fetching, outshining all its peers – and many in the luxury class – while retaining the functionality expected of a vehicle in this segment.

It starts up front with a bold rendition of Mazda's signature 5-point, shield-like grille featuring five twin-strake horizontal bars and an oversize Mazda emblem, tucked under the overhanging leading edge of the hood, and surrounded by a chrome trim strip that forms the upper edge of a pair of narrow headlamp enclosures. 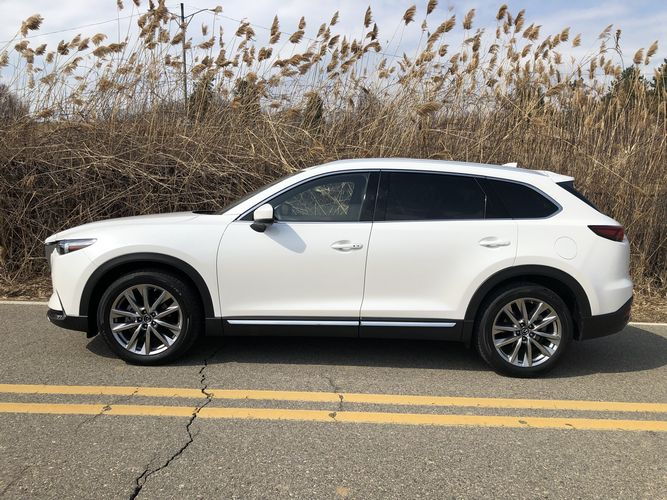 Along the sides, an upper character line begins just above the headlights and terminates at the upper edge of the taillight housings, while there's minimal wheelarch gap with either 18- or 20-inch wheels. In back, a thin Chrome trim strip bisects both taillights and extends across the rear fascia, matching the bright chrome trim of the lower valance.

LED headlights, daytime running lights, and taillights are standard across all trims, with adaptive front lights on Grand Touring and Signature models. Choosing either top trim also adds LED fog lights, a sunroof, aluminum roof rails, and, in addition to the rear valance, bright chrome lower molding in front and along the sides. 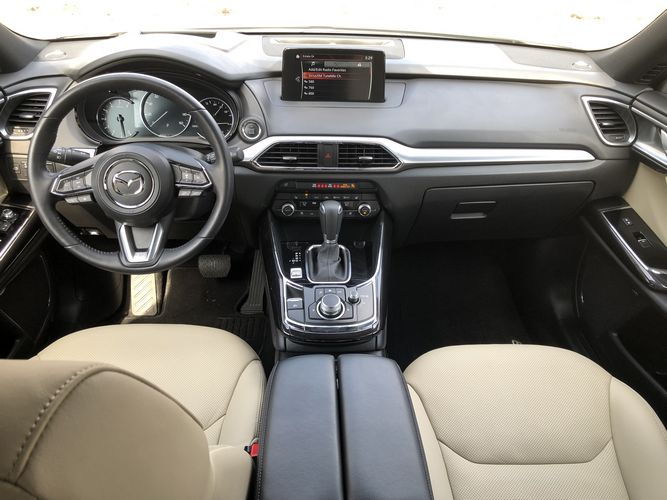 The aura of luxury continues inside, with brushed aluminum trim running the width of the dashboard even on the $33,275 entry-level Sport, and the rest of the cabin offering class-above, nicely-grained soft-touch surfaces (including the sides of the center console), along with silky-smooth switchgear. The seats, covered in sturdy-looking fabric, are on the firm side – considering American's tastes – but they're well-bolstered, while the second row, though relatively flat, can be reclined manually, offering more legroom than the Honda Pilot. The ride height is also commendably high, with great views out the front and sides, although the A-pillars aren’t all that narrow. The view out the rear three-quarters is aided by the window between the C- and D-pillars. The view out t back is okay, but the large D-pillars create a couple of fairly large blind spots (although a rear view camera is standard).

The gauges are clear and easy to read, while most of the major controls, all within easy reach of the driver, are intuitive. A particularly nice touch on Grand Touring and Signature models is a new 7-inch TFT screen gauge cluster - replacing the smaller 4.6-inch cluster on 2018 models - that displays fuel level, outside temperature, odometer, trip computer, compass, and instant fuel economy readings.

But for all its sumptuousness, the CX-9 falters in a couple of areas. For one, although Mazda has taken a step in the right direction by making Apple CarPlay and Android Auto standard on most trims, the infotainment system remains a work in progress. With the touchscreen (7or 8 inches depending on trim) a reach, the backup is a console-mounted panel with a dial/push/joystick knob, and music, home, navigation, back and star buttons, plus a smaller radio volume/on/off knob. The result is that, other than hitting the navigation function or turning the radio on or off, users are forced to click through a maze of menus and sub-menus. Case in point: presetting stations should be intuitive, but we had to dig out the owner's manual. Touring, Grand Touring, and Signature owners can simply plug in their Android or iPhones and bypass much of the morass – Sport owners aren't so lucky. Enough said.

Secondly, the CX-9's raked roofline and back glass limit vertical space behind the third row, making the14 cu ft of storage less useful than it could be. Folding the row increases storage space to 38 cu ft - a move we suggest should be more or less permanent, since it only offers a grade-school age-appropriate 30 inches of leg room, 40 inches of hip room, and 35 inches of headroom. 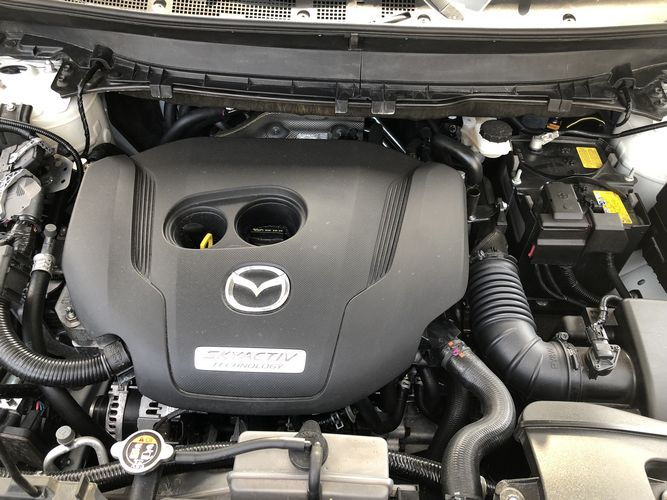 The CX-9 continues with the single engine and transmission combination that has been offered since it bowed in 2015. The 2.5-liter 4-cylinder engine showcases Mazda's Dynamic Pressure Turbo technology for a quicker spool-up below 1,500 rpm than a traditional twin-scroll unit. The engine develops 250 horsepower on 93-octane gasoline and 227 horsepower on 87-octane regular fuel, along with 310 lb.-ft. of torque.

With the transmission missing a couple cogs vis-a-vis the competition, it's not surprising that fuel economy is now only average for the class. Front-wheel-drive models score an EPA-estimated 22 miles per gallon in the city, 28 on the highway, and 24 combined, figures that fall to an EPA-estimated 20 mpg city, 26 highway, and 23 combined with all-wheel-drive. Around town, we observed a vehicle-measured 20.6 miles per gallon in our AWD tester.

An engaging chassis, smooth throttle response, and great feedback through the steering wheel and brake pedal (with a nice initial bite to the brake pads) makes the CX-9 the best handling vehicle in its class. The inline-4 turbo matches the performance of many V-6 competitors, while 310 lb.-ft. of torque is available at 2,000 rpm, with power coming on nearly instantly.

Mazda's largest crossover also tracks nicely down the road, with excellent suspension compliance, and body lean that's well-controlled through the corners. The ride is firm, but not jittery – an attribute not usually found in vehicles with this profile – while in around town driving and at highway speeds, only a slight amount of wind and road noise enters the cabin. 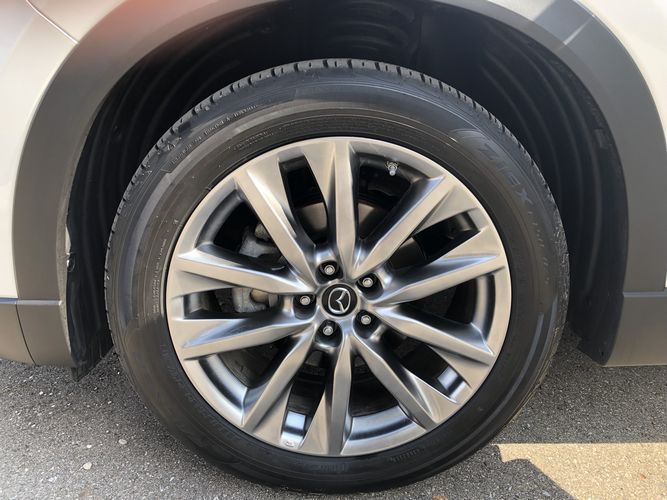 At the same time, comfort is prioritized over performance. If you're expecting a vehicle that's as fun to drive as a Mazda3, or even the CX-5, prepare to be a bit disappointed as, despite the engine's willingness, acceleration is hindered by the aging 6-speed automatic. And while the CX-9's chassis is entertaining, size still matters. Tipping the scales at 17 pounds over the 2 ton mark, a base front-wheel-drive CX-9 outweighs a Mazda3 and FWD CX-5 by 1,250 and 676 lbs, respectively. While offering kudos to Mazda for wringing fun out of a vehicle this size, the laws of physics still prevail. 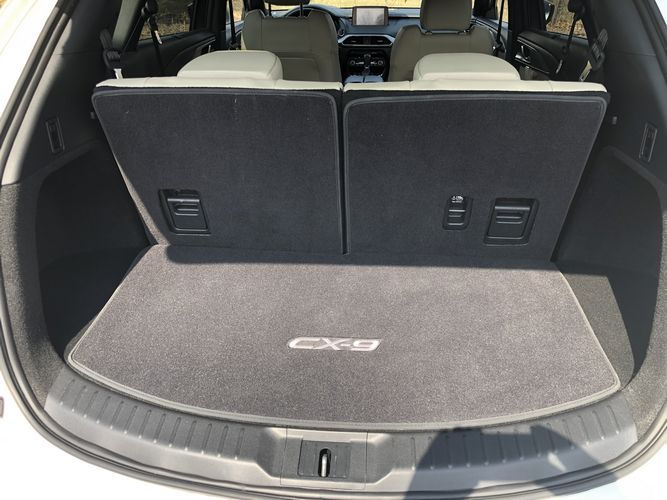 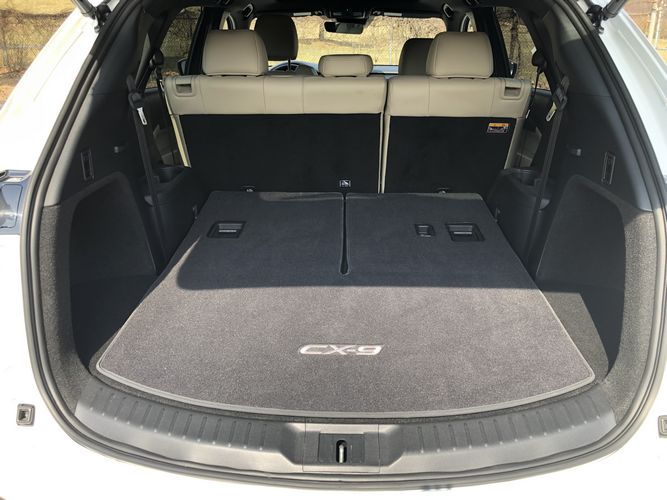 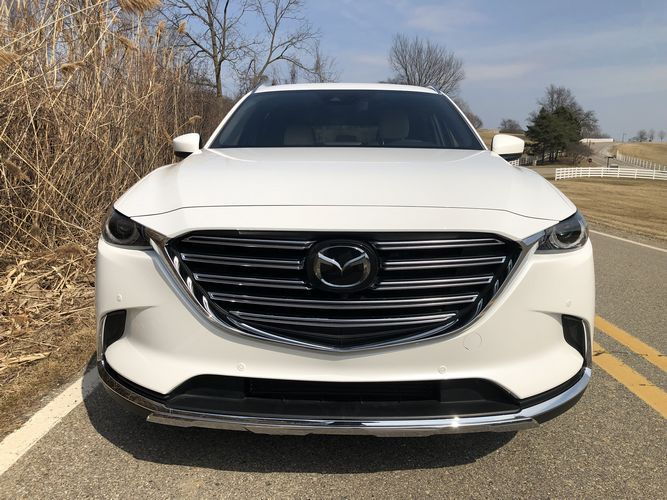 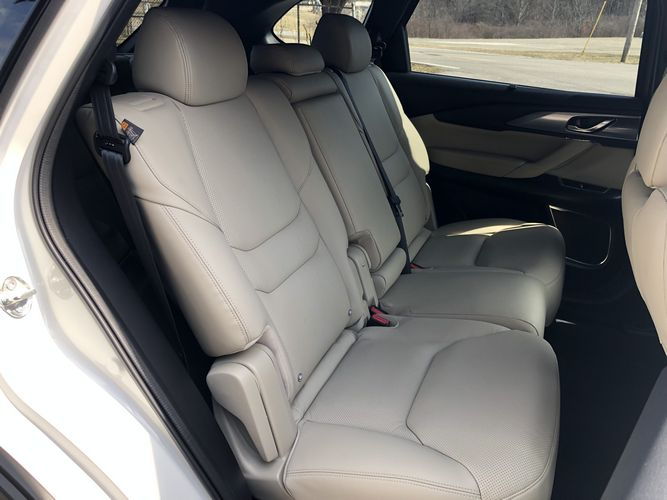 Although Mazda's offering disappoints with middling cargo space, a tight third row, mediocre fuel economy, and an infotainment system eclipsed by many rivals, the CX-9 also impresses with stunning sheetmetal, widely-available safety tech, and a stunning interior. Add to those qualities the elusive fun to drive factor, and you have the vehicle we recommend in the midsize crossover class.