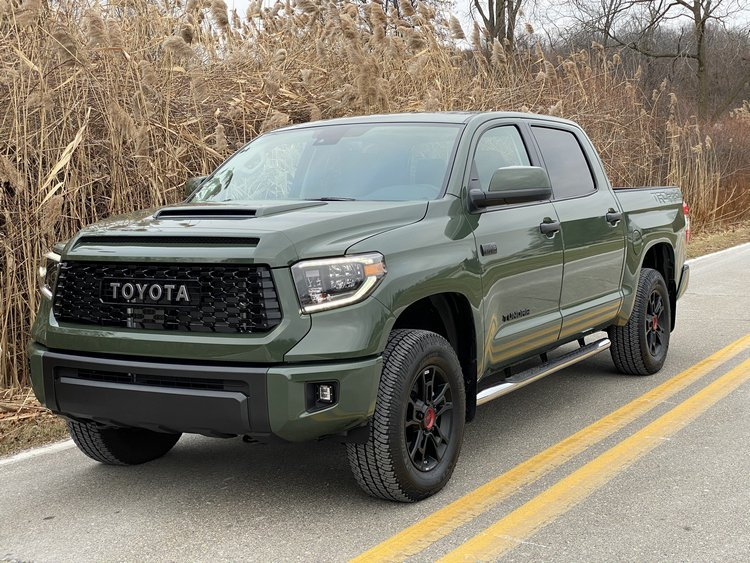 A staggering 13 years into its current model run, the 2020 Toyota Tundra lineup is simplified further with the elimination of the 4.6-liter V-6 engine. Other changes include upgraded touchscreens, wider deployment of keyless push-button start, and the addition of a Double Cab model to the TRD Pro trim. 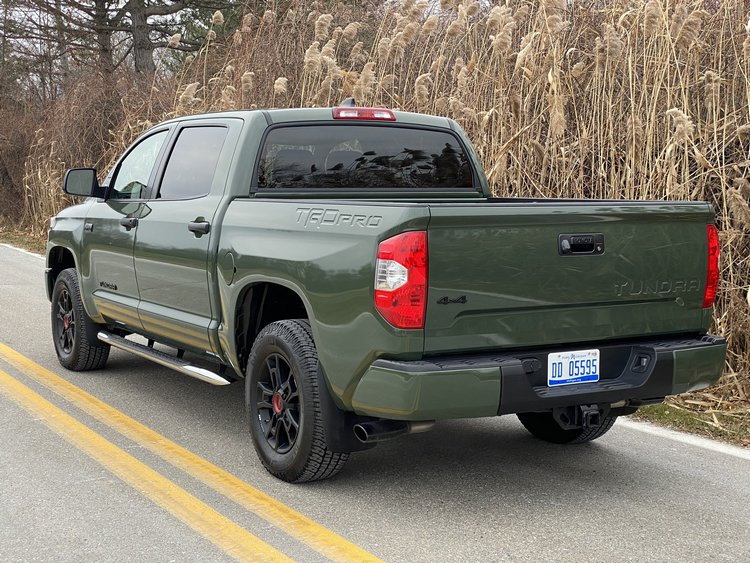 Looking the best of the bunch at managing the basic lines of the Tundra, examples like our TRD Pro, finished in resplendent, bad-ass Army Green, feature a massive semi-gloss black grille that displaces most of the fascia's real estate, bracketed by a pair of square LED headlamp enclosures that are outlined on all but the inboard side by LED running lights. A wide, narrow air intake above the grill, and a secondary air intake atop the hood complete the aggressive look. The front bumper, fared into the fascia, is finished in matte black below the grille, with body-color end caps containing LED fog lights that wrap around to the front wheel wells. 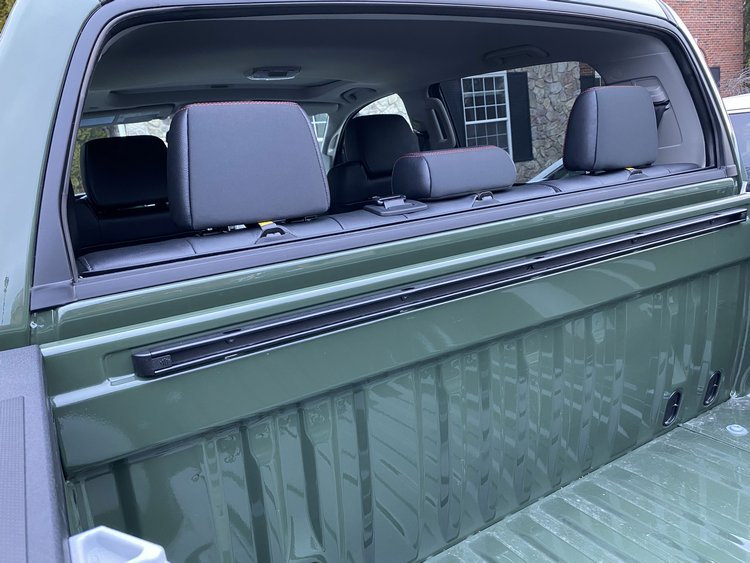 Along the sides, an upper character line just above the door handles begins behind the headlamp housings and extends rearward to the upper edge of the taillight housings, while a deeply sculpted lower character line spans the distance between front and rear wheelhouse openings that enclose 18-inch matte black-finished forged BBS alloy wheels wrapped in p275/65R18 Michelin LTX all-terrain tires. “TRD PRO” is stamped into the upper rear corner of the box sides, the tailgate has the "TUNDRA" name hot-stamped into the lower passenger-side corner, with a matte black/body color bumper that mimics the one up front. 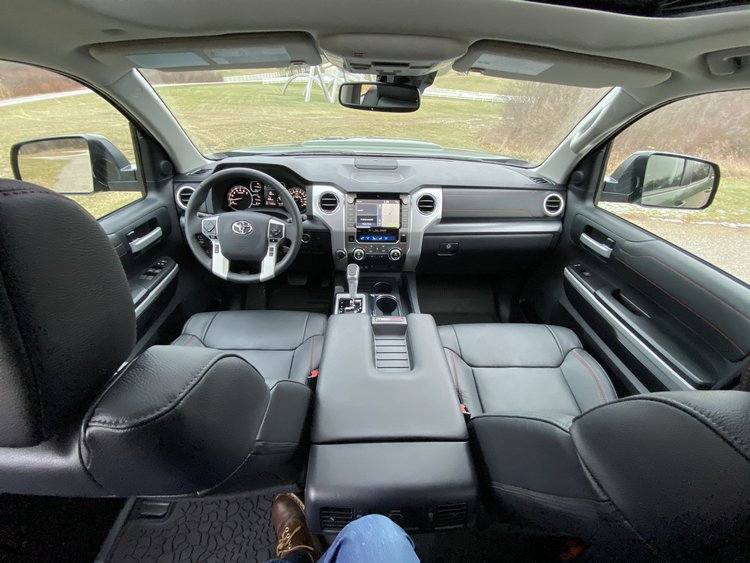 Inside, the Tundra’s symmetrical cockpit carries over unchanged with ergonomically-arranged controls within easy reach of the driver that remain simple to understand, intuitive to use, and silky-smooth to operate. The front seats, 10-way power driver’s and 6-way power passenger, covered in black leather with contrast red stitching on our TRD Pro (matching the dash and arm rests) and separated by a console the size of a small aircraft carrier flight deck are, like all trims, nicely shaped while offering plenty of support and all-day comfort on long trips. Our CrewMax cab featured ample room for five full-sized adults (SR and SR5 trims offer the increasingly-rare option of a front bench). 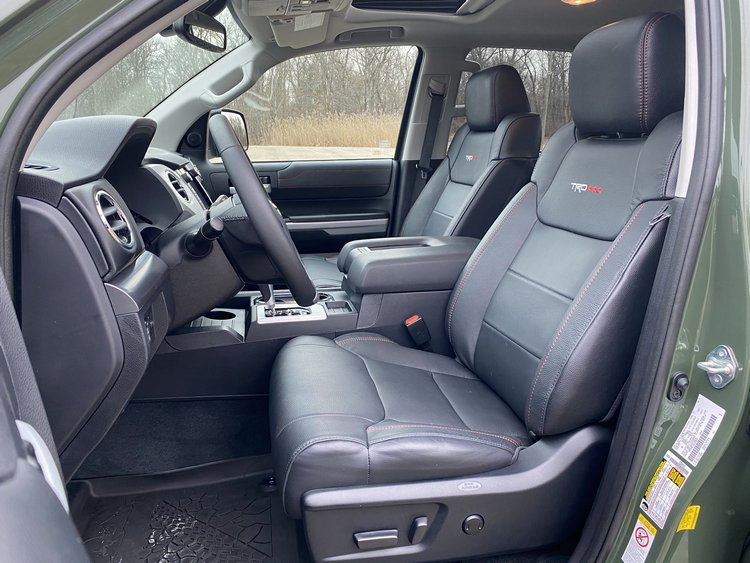 The driver’s view out the front and sides and back is very good, considering the Tundra’s bulk. And while the large B-pillar hinders the sightline out the rear three-quarters, the standard rear-view camera alleviates most issues.

On the negative side of the ledger, despite fine graining and close tolerances, the extensive use of cheap-looking, brushed silver plastic trim fails to match the upscale interiors from Ford and Ram, while the lack of a 360-degree camera made parking difficult – especially crowded Chicago neighborhoods. 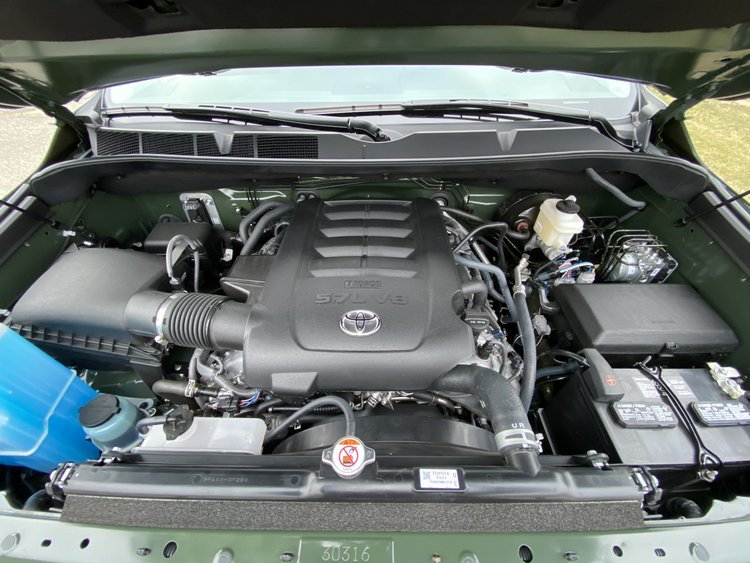 With the eighty-sixing of the 4.6-liter V8, the 381 horsepower, 5.7-liter, dual overhead cam, normally aspirated V8 is the only powerplant offered in any Tundra. With the smaller engine’s demise, that means the best you can expect is a dismal EPA-estimated 13 miles per gallon in the city, 18 on the highway, and 15 combined on models with rear-wheel-drive. Check the AWD box (or, in our case, the TRD Pro model), and those numbers drop to an EPA-estimated 13 mpg city, 17 highway, and 14 combined. Our vehicle-measured fuel economy, in highway-heavy driving from Detroit to Chicago and back, turned out to be 16.3 mpg. 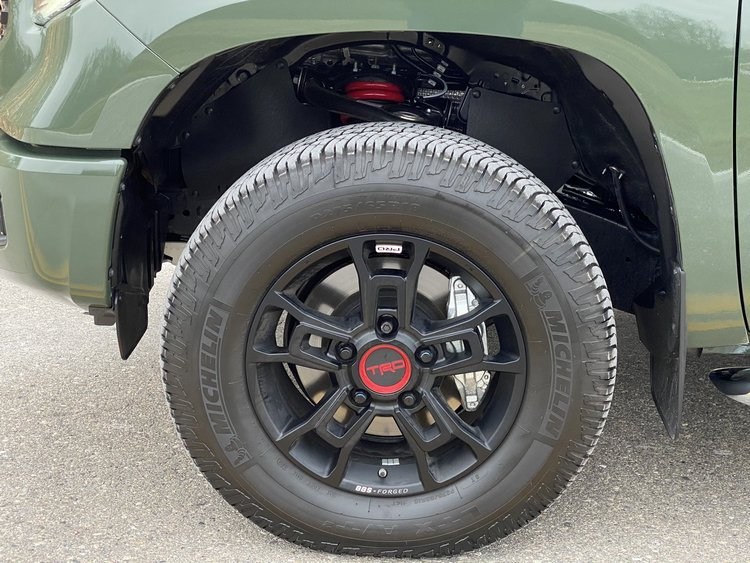 As long as you bring along a credit card with plenty of room, you’ll find the Tundra to be an extremely capable, albeit thirsty, road warrior. Handling is composed and confidant, and the suspension did an excellent job of isolating the worst pothole-riddled roads throughout the City of Chicago. The same story unfolds at highway speeds: a stability unaffected by crosswinds, grooved pavement, and road irregularities. Credit this to a superb suspension consisting of coil-spring high-mounted double-wishbones up front with a 2-inch lift, stabilizer bar, and Fox shocks with piggyback reservoir, and a live rear axle with trapezoidal, multi-leaf springs with staggered outboard-mounted Fox shocks with piggyback reservoirs. Interior noise is another of the Tundra's attributes, with highway sound levels comparable to those of luxury sedans we've driven. 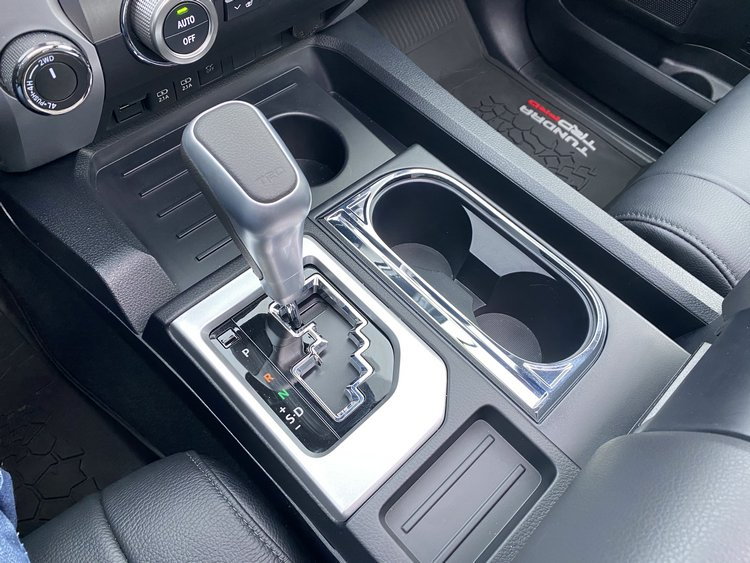 At the same time, the lack of engine choices – no diesel, hybrid, or turbocharged 4-cylinder – puts the Tundra at a distinct disadvantage with rivals from Ford, Ram, Chevy, and GMC, while the transmission, down a couple of cogs, is at le partially responsible for the lackluster fuel economy. Secondly, while the steering has good heft, there's very little feedback to the driver. Finally, while the long list of advanced safety features is laudable, the Tundra received “Marginal” and “Poor” scores in IIHS driver- and passenger-side small-overlap tests, with the headlights rated as “Marginal.” 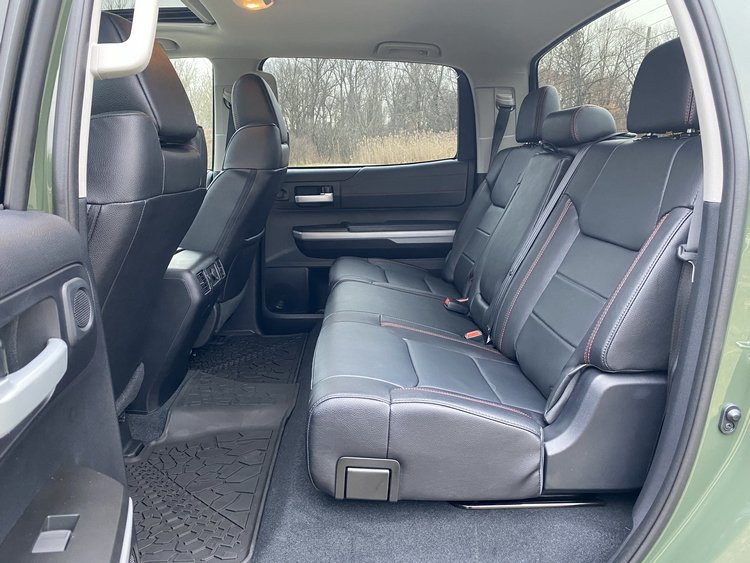 2020 Tundra prices start at $34,895 for a rear-wheel drive SR double cab, standard bed, work truck model and can rise to over $60,000 for a fully-equipped, four-wheel-drive, CrewMax Cab, 1794 model with the optional TRD Off-Road Package. 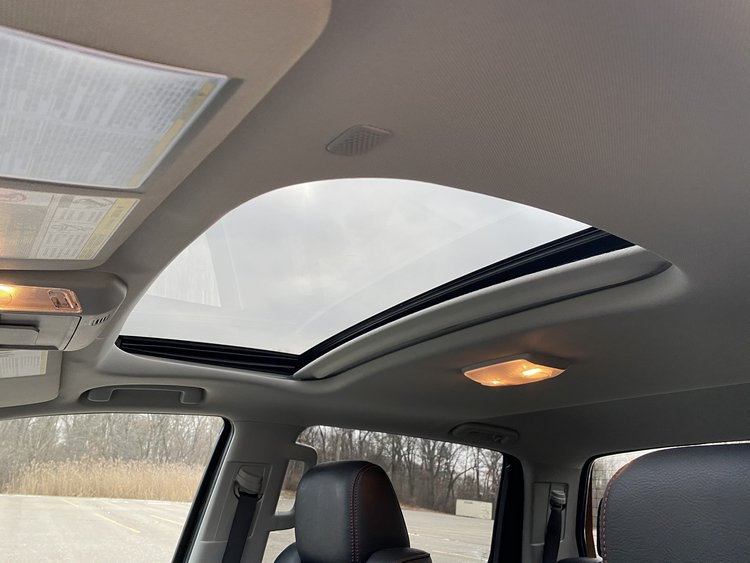 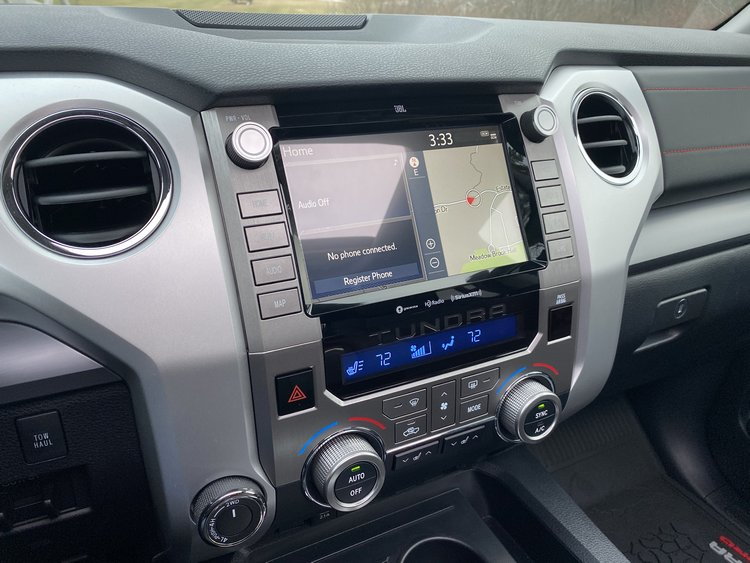 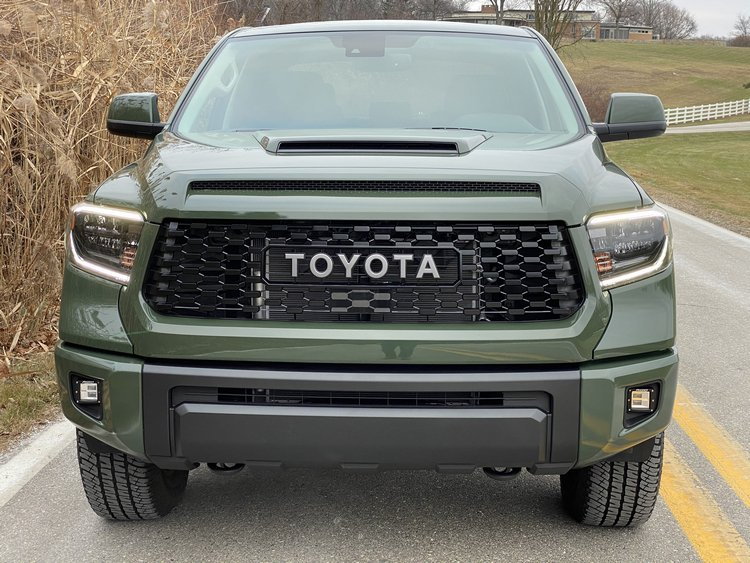 The Tundra TRD Pro’s dash of aggressiveness and off-road capabilities, smooth ride, best-in-class standard advanced safety features and Toyota's reputation for quality and reliability, making it appealing. But in other areas – a dated design, cheap interior trim, a lack of engine options and wretched fuel economy - making the latest version a tough sell in the full-size pickup class. 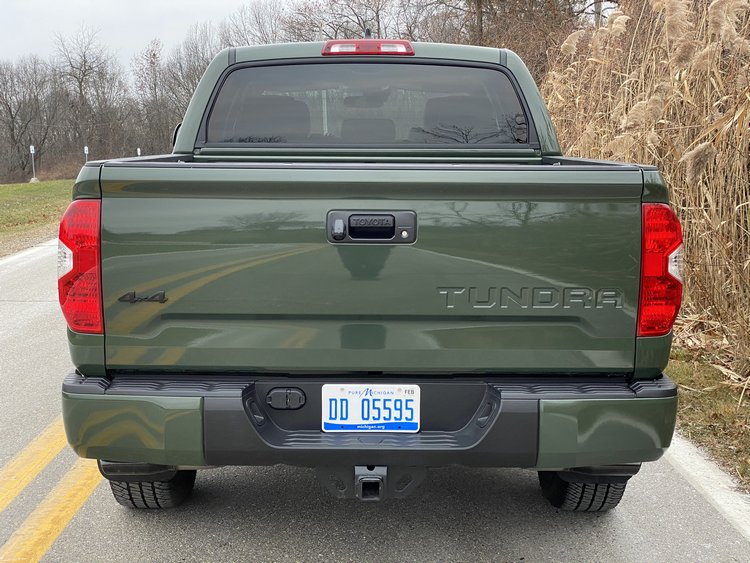